There have been lots of influential people throughout history. Who are the 100 most influential New Yorkers of the past 25 years?
Image from Muy Interesante, 1993

The Observer recently released a list of the 100 Most Influential New Yorkers from the past 25 years. And while 100 people might sound like a lot, consider the fact that there are currently more than 8 million people living in New York City, and in the past 25 years many more have also lived—and died—there. Now let’s get back to those top 100 people. Sounds a little bit more impressive now.

To determine who would make the influential people cut, the Observer considered the following questions, a test of sorts. It helped sort out who was simply a successful person and who was really an influential dealmaker, dreamer, or visionary:

They then divided the winners up into several categories, including Arts, Business, City Life, Entertainment, Fashion, Media, Politics, Real Estate, Society, Spirit of the City, Sports, and Tech-VC. And one thing we’re proud about is that we’ve already talked about many of these influential people here on Cultivating Culture, whether simply mentioning their contributions to culture or writing a full profile on them. So who made the Observer’s list? Here are a few of the winners: 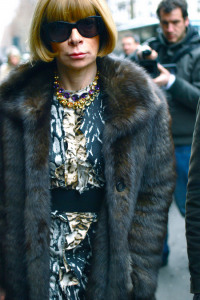 Anna Wintour is unquestionably one of the most influential people in fashion.
Image: kekkoz via Flickr CC

Interested in learning more? Be sure to check out our full profile spotlights on KKR’s Henry Kravis and Lauren’s husband, Andres Santo Domingo.