Defining and Assessing Rape Culture in the United States

One of the biggest issues at hand here in the United States is that of the rape culture. There’s a battle going on between feminist activists and those who would tolerate any kind of sexual coercion or abuse. It’s a battle that needs to happen for change to occur, and with the myriad claims feminists have about the abuses rape victims have or could suffer, it’s hard to understand how anyone could be arguing against them. But, as with all things, it’s a subtly complex issue.

The alarming rate of Internet “trolls” and vile comments made by a minority of people online has, first of all, made it seem like there are more opponents to equal rights than there actually are. We tend to her dissenting voices more clearly than those who agree with us, and some make it their job to disagree no matter what you’re arguing.

Women most certainly deserve equal rights and protections in instances of rape. Our culture needs to stop objectifying women and blaming them for “getting raped,” as if they chose to do so. But the feminist movement also needs to be clear and honest in its journey toward a better tomorrow, not misleading people with distorted versions of the truth.

Consider the following: Nation magazine blogger Jessica Valenti quoted U.S. Senate candidate Richard Mourdock, implying that he had stated that rape was a “gift from God.” In fact, she simply pulled a piece of the quote, in which he stated that “life is [a] gift from God… even when life begins in that horrible situation of rape” (emphasis added). Clearly, Mourdock did not mean to imply that rape is a gift—but that’s how his words became twisted by Valenti.

Another example is the widely spread fact that says thirty-one states allow rapists to seek child custody or visitation rights. This is certainly an alarming statement, but when examined closer, it simply means that thirty-one states do not explicitly bar it—mostly for the reason that it happens so infrequently that it’s been deemed a non-issue. There is only one case on record where a woman, Shauna Prewitt, had to take part in a custody battle (which she won). Certainly this sort of thing shouldn’t happen, and the law should change to add those protections. But we also have to realize that sometimes these problems stem not from sympathizing with a rapist father but simply not realizing that there is an issue at hand (Prewitt herself recognizes this). Refusing to change the law after it’s been made clear that there is an issue, however, is another matter. 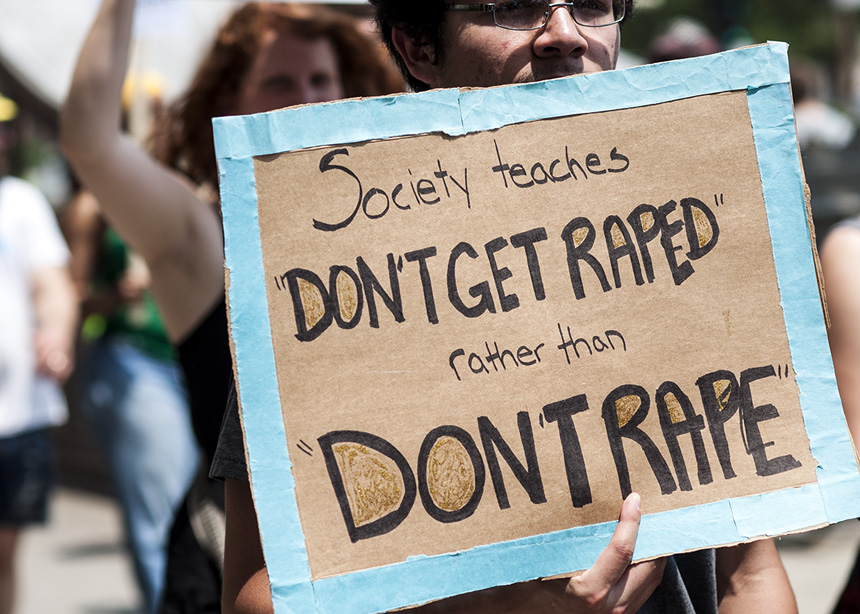 Society teaches “don’t get raped” rather than “don’t rape.”
Photo used with permission by Michael Courier

There are certainly many things in this country that need to change, many laws that need revising, and many protections that need to be added.Victims need to stop being blamed getting raped and rapists need to start being held more accountable. No rape should ever be validated because someone claims “she was asking for it.” Yes, women still have many battles ahead—but they should be fought with honesty and clarity, not through distortions of truth. Many are doing so already, and their arguments and methods are by far the most compelling and effective.