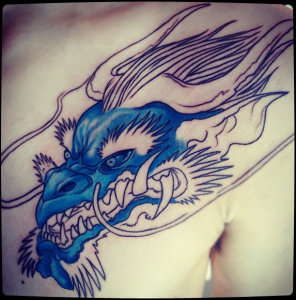 Tattoos have been a part of human society for thousands of years. The designs can simply be ornamental or incorporate complex symbolism. They can be elaborate or simple, and can represent anything from religion to punishment to status. A loved one can even be remembered or honored with a tattoo.

The earliest evidence of tattoos dates back to the famous “Iceman” discovered in 1991. Carbon dating puts him at over 5,200 years old. Patterns of small dots and crosses on his lower spine, right knee, and right ankle may have been applied as therapeutic cures or status markers.

Egyptian women were also thought to have tattoos, as portrayed in figurines and pictures. Female mummies dating back to c. 2000 B.C. have also been found with tattoos. These tattoos, like the Iceman’s may have been used as status markers, as therapeutic practice, or as amulets. 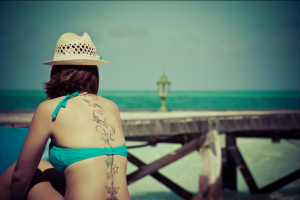 As they become more mainstream, tattoos are beginning to find themselves considered “art”
Image: Juan Di Nella via Flickr CC

Fast forward into the modern world, and tattoos still follow some of the same basic concepts: they can be religious, decorative, symbolic, simple, or complex. And though they don’t technically denote status in modern societies, they can still place individuals into categories. Some gangs have members get tattoos, and some people believe tattoos are indicators of “deviant behavior.”

In America, getting a tattoo is often seen as a rebellious act by teens and young adults; however in recent years that has begun to change. While some young people undoubtedly get inked to get a reaction, that’s certainly not the case for everyone. In fact, tattoos have recently begun to creep onto the fine art stage.

Kate Moss has two swallows tattooed on her lower back, originals by Lucian Freud.

Last year, British model Kate Moss made headlines when she revealed in an interview that she had a tattoo of swallows that was by the late artist Lucian Freud. “It’s an original Freud,” she said in an interview with Vanity Fair. “I wonder how much a collector would pay for that? A few million? I’d skin graft it.”

Other artists, like Damien Hirst, Jeff Koons, Dinos Chapman, and Richard Prince, have also designed tattoos. As an art form, tattooing is advancing more now than it ever has. Whether it remains more on the fringe or fully gains the label of “fine art” remains to be seen.