Our Clothing Comes at a Cost: How the Bangladeshi Factory Collapse Has Ignited a Conversation on Ethics 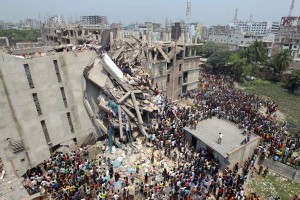 Dangerous conditions are a reality of the garment industry in Bangladesh, a fact that has been made globally public after a recent factory collapse claimed 1,127 lives, a disturbing number that continues to escalate. While thousands of people in Dhaki, Bangladesh grieve over this tremendous loss, the rest of the world has been posed with a great ethical dilemma: how can we continue to purchase and wear clothing made by people who endure these conditions and receive only a minute fraction of what the garments retail for in Europe and the U.S.?

What’s almost as egregious as the tragic loss of over one thousand lives in the garment factory collapse, are the horrific norms surrounding the garment industry in this country, and many others. Bangladesh is reportedly the second largest garment producer in the world (China is number one), with an astounding 5,000 factories, and thousands of workers suffering relentlessly under poor conditions. 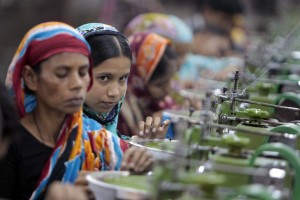 These people endure sweatshop environments and long hours, and some of them bring home monthly wages as low as $38. Can you remember the last time you purchased a garment from H&M, or saw a jacket in the window displays of retailers like Calvin Klein or Tommy Hilfiger for less than $38? These are just some of the many clothing labels that utilize foreign garment factories for their cheap labor, making incredible annual profits at the expense of workers’ lives.

A troubling reality is that major labels and clothing producers are only now seeking to reevaluate the foreign garment industry, after over one thousand lives were lost in this most recent factory disaster. According to the Christian Science Monitor, this latest tragedy is the most prolific since the mid-1980s, and that an estimated 1,800 garment workers have lost their lives in similar factory fires and collapses in Bangladesh since 2005.

It is critical to understand that what we purchase comes at a larger cost than its price tag. As consumers, we must hold retailers accountable for their ethics, making informed decisions about what we buy and where it comes from. Read this article for more information on the culture and conditions surrounding the garment industry in Bangladesh.