The Best of Friends: Ellsworth Kelly and MoMA 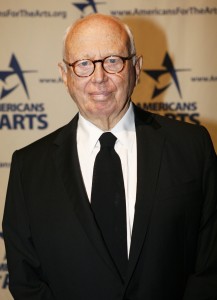 Ellsworth Kelly and the Museum of Modern Art—MoMa for short—go way back. Mr Kelly, who celebrated his 90th birthday on May 31st, has had a friend in the museum since the 1959, when curator Dorothy Miller organized the “Sixteen Americans” exhibit, the first to feature his work there. Miller was one of the fist curators of the museum, and her choice in Kelly sparked a lifelong friendship that has been fruitful for both parties.

In 1960, MoMA bought one of Kelly’s works, “Running White,” which was a black canvas featuring a white swirl that creates an optical illusion of movement. In the more than half-century since then, MoMA has acquired a whopping 22 Kelly works, from drawings to paintings to sculptures to prints.

The museum’s current President is Marie-Josee Kravis. She and her husband, Henry Kravis of KKR, are big-time contributors to the NYC art, culture, and education scenes. And both are both great Kelly enthusiasts; Ms. Kravis has even joked that they practically live with Kelly and his wife—since they own so many of the artist’s works. Some of those works the Kravises have even promised to give to the museum eventually.

Most recently, the museum has been working with Mr. Kelly to enhance their collection. While many of the artist’s works have been regularly displayed, others have suffered the storage room. MoMA has worked with Kelly to exchange works, trading him some of the pieces they own for others that he has.

“We decided to collaborate with the artist,” said MoMA’s chief curator of painting and sculpture, Ann Temkin, “to see how we could best enhance the collection.” Working with Kelly and his Chelsea art dealer, Matthew Marks, Temkin was able to arrange a trade of five new works.

“Two of the works from the 1950s are paintings that Ellsworth had never been willing to part with,” Ms. Temkin said. These works, rather than being simple, across-the-board trades, were swapped for two of MoMA’s pieces each.

With the newly acquired works, the Kelly collection at MoMA should be greater than ever—so keep a weather eye out for the new additions.