“Station To Station” is a Mobile, Countrywide Arts Happening 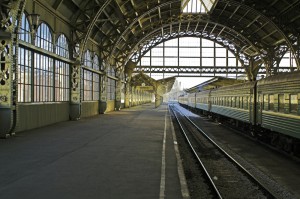 Some contemporary artists love to create exhibitions that exist on a grand scale. There are sculpture parks dedicated to large, imaginative artworks, and galleries filled to the brim with interactive pieces, but have you ever heard of an art installation that spans the width of the country? That’s exactly what “Station to Station: A Nomadic Art Happening” is. “Station to Station” is a public art project conceived and organized by Doug Aitken that involves a train, various stops between the east and west coasts, and a whole lot of artists tagging along for the ride.

Earlier this month, “Station to Station” launched when the project’s train took off from its New York starting point. As its title suggests, the project is a touring arts event that provides site-specific performances and exhibits at various train stations throughout the country. In a press release about “Station to Station,” organizer Doug Aitken explained that the artists’ intention is to “create a modern cultural manifesto,” something the group is doing by drawing from the art, culinary, literary, music, and film worlds to create an interdisciplinary countrywide exhibit. 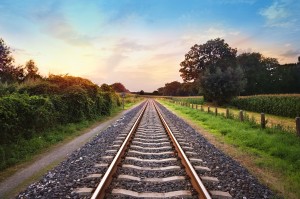 Departing from New York’s Riverfront Studios on September 6th, the train then took the mobile project to Union Stations in Pennsylvania and Chicago, St. Paul Union Depot in Minnesota, and the Santa Fe Farmer’s Market Pavilion in New Mexico. There are still scheduled events in Arizona and throughout California before “Station to Station” reaches its final destination in San Francisco on September 28th. Doug Aitken and his band of artists have been keeping the world up to date on the trip using social media, and so far the project has existed as a remarkably ambitious arts initiative, as well as a really, really fun road trip.

Stops along the trip will include site-specific presentations and performances, and some of the participating artists will travel along on the train to more than one venue. Patti Smith, Mavis Staples, Ernesto Neto, Jackson Browne, Savages, Beck, Cat Power, BodyCartography Project, Stephen Shore, and many, many others can be found participating at one or more of the various destinations. The amount of imaginative, pioneering talent packed into “Station to Station” alone is incredible; it was clearly a concept that numerous seasoned artists were drawn to.

All donations and ticket sales from the project will go to the Station to Station Cultural Fund, which supports “non-traditional programming at nine partner institutions around the country” according to Aitken. Some of the 9 beneficiaries include the Sundance Institute, Walker Art Center, Carnegie Museum of Art, and MoMA PS1.

For more information and updates about “Station to Station,” visit the official project website.