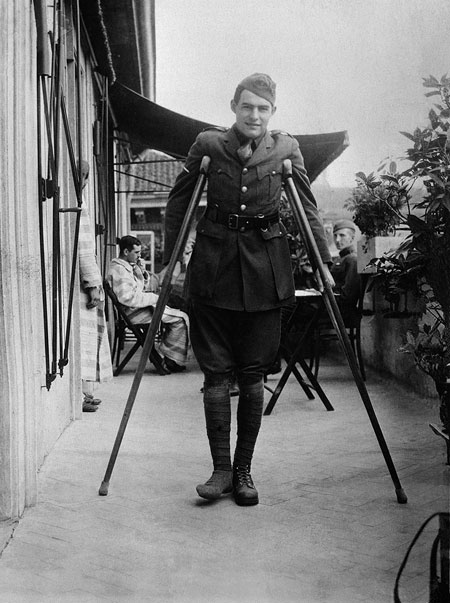 Image: via The Morgan Library and Museum.

Ernest Hemingway is a name to conjure with. It is not overstating things to say that his writing, both as a novelist and a journalist, defined the first half of the Twentieth Century. His stylistic contributions are still influencing writers today – writers either emulate him or work hard to avoid any emulation at all, which is just another kind of direct influence. His handwriting is large across the face of American literature.

But he probably never predicted that even his least unpublished scratchings could be considered valuable or art.

For four months this autumn and winter, the Morgan Library and Museum will be hosting the show “Ernest Hemingway: Between Two Wars,” an exhibition with approximately 95 objects salvaged from Hemingway’s life. Among the collection are his dog-tags, lists of un-used titles for “A Farewell to Arms,” and a four-page letter he wrote to his fourth wife before they were wed, in which he explicitly compares orgasm to a grenade.

Most of the items that will be on display come from the John F. Kennedy Presidential Library and Museum in Boston which has its own collect and is teaming up with the Morgan for this show, but roughly twenty-five belong to the Morgan itself. Declan Kiely, the Morgan’s curator of literary and historical transcripts, has spent the last three years hunting them down in auction house and private collection in preparation.

“Hemingway was a pack rat,” was Mr. Kiely’s fond comment on the hoard of letters and lists that make up the bulk of the collection. “He never threw things away.” Which likely made him a curator’s ideal subject.

“Ernest Hemingway: Between Two Years,” touches on every span of the author’s life in six sections, roughly grouped by places Hemingway lived. It will be on display at the Morgan Library and Museum from September 25th through January 31st, 2016. The library’s hours at 11am – 5pm Tuesday through Sunday, closed Mondays. Admission is free.