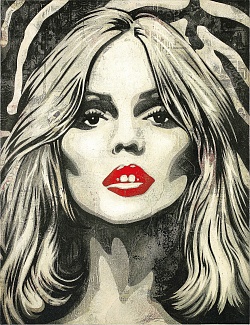 Shepard Fairey, a contemporary street artist widely known for his Barack Obama “Hope” poster, has created a new collection of art exclusive to Sotheby’s auction house. The artist is creating six new portraits of famous rock stars, including Debbie Harry, David Bowie, and Jimi Hendrix to be auctioned by the house. The portraits will be priced at $40,000 each.

Fairey’s portraits will debut at an exhibition titled “Rock Style” on September 22nd. The artist’s work will only be a small piece of a larger show, which will feature 52 photographs of rock stars by some of the world’s best-known photographers. The show was organized by fashion designer Tommy Hilfiger and New York art dealer Jeffrey Deitch. “The show reflects a time when musicians styled themselves, and were one of the main sources of inspiration for fashion designers,” reports the Art Newspaper. The show is set to close on October 30th.

Earlier this year, Fairey was arrested for putting up posters on private and government properties in Detroit. The case is fairly high-profile in that city, owing to Fairey’s celebrity, though the crime of street art itself is relatively small and Fairey was quickly arraigned and released. But there is a place for street and pop art now thanks to artists like Fairey and British-born Banksy. In 2013 Los Angeles lifted a ban on street art and now, colloquially, even if street art is illegal, people have a tendency to still refer to street art as “murals” rather than as “graffiti.”

Fairey’s arrest has not held up production of the portraits for Sotheby’s, says Fru Tholstrup, director of S2 gallery, where the exhibition will be held. Fairey’s recent arrest may have bolstered his name and image somewhat. Pieces from the exhibit will sell for a range between $1,000 and $15,000—a good range that offers “something for everyone,” Tholstrup says.