Waiting for the Night Train 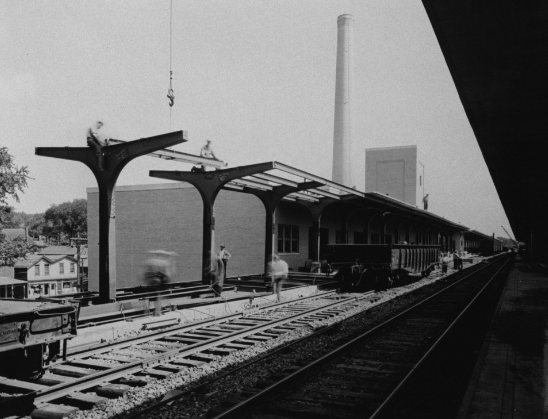 Image: The rail platform set to be restored | Syracuse

Strictly speaking, the ghostly white sculptures on the defunct New York Central rail platform in Syracuse, NY are graffiti. Duke Epolito had no permission to place the eerie human shapes there in 1982 when he did. But the lumpy fiberglass figures have been there for 34 years now, waiting for a train that has never come. Epolito hops the fence into the platform about once a year to clean and maintain them, and other members of the community use them to make their own kinds of marks.

Now, the future of the illicit installation, titled “Waiting for the Night Train,” is in doubt. The state of New York Not is planning a $1.5 million restoration of the historic platform. Not to restore it for use – the restoration will include a higher, more ornamental fence to keep the public out, but to stop the decay of the historic structure and make it a pleasant view for passing commuters. And Commissioner Matt Driscoll, the former Syracuse mayor who headed the restoration, says that it’s ‘doubtful’ the statues will be left in place.

Epolito calls his works “commuter art”: “The only way you could enjoy it is driving by,” he says. He considers the platform part of the sculpture. Relocating them to a park or gallery, he says, would rob them of all context. And context is what gives the distinctly unlovely figures of men, women, and children meaning. They are waiting for a train.

If the NYDOT does remove the sculptures as seems likely, Epolito says he’ll take them, ideally to move them to another city and another dead train station. But Syracuse natives hope they’ll stay. A local newspaper’s unofficial poll found 77% of their readers wanted to keep the statues, and artist Ty Marshal has start a change.org petition to urge the mayor to keep the installation intact and in place.