What Do Van Gogh and Swimming Pools Have in Common? 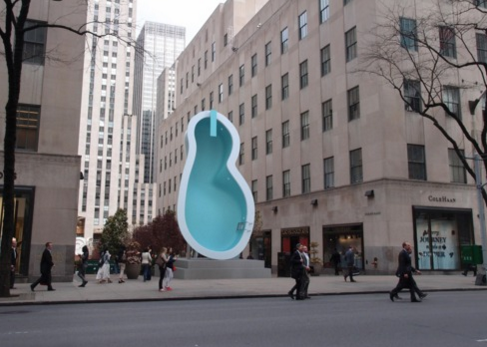 Michael Elmgreen and Ingar Dragset have a thing about swimming pools. Together, they’ve used them often as a theme in their collaborations around the world. They’ve left a diving board hanging out of a window in a museum in Denmark, a wax corpse floating face down in a pool in Venice, and a boy about to dive to his death from a high dive into a shallow pool in Japan.

Now, they’re pooling their talents for a tribute to Van Gogh. Backed by the Public Art Fund, the Berlin-based duo will erect an ear-shaped blue swimming pool, diving board intact, in front of the Rockefeller Center on Fifth Avenue.

It’s not only the Dutch painter they hope to invoke. Inspired by west coast roadside display pools, they want the fiberglass pool to bring west coast to east, middle class nostalgia to a campus of the very rich.

Working to Elmgreen and Dragset’s exact designs, the pool was built in Slupsk, Poland, by a team of twenty. It is the only pool ever made in the Slupsk fiberclass factory; virtually no one in Poland or Norway, where Dragset is from, has an outdoor pool. Then the four and a half-ton pool was trucked to Belgium and shipped by boat to New York City. To help stave off vandalism, a security guard is in the budget.

Titled Van Gogh’s Ear, for the popular but unconfirmed stories about the fate of the mercurial artists’s ear, the sculpture will be installed on April 12th. Though the concept art shows it on its side, like the display pools that preceded it, Dragset has mentioned being tempted to install it level, and let it become Manhattan’s 35th outdoor swimming pool, right there on Fifth Avenue.