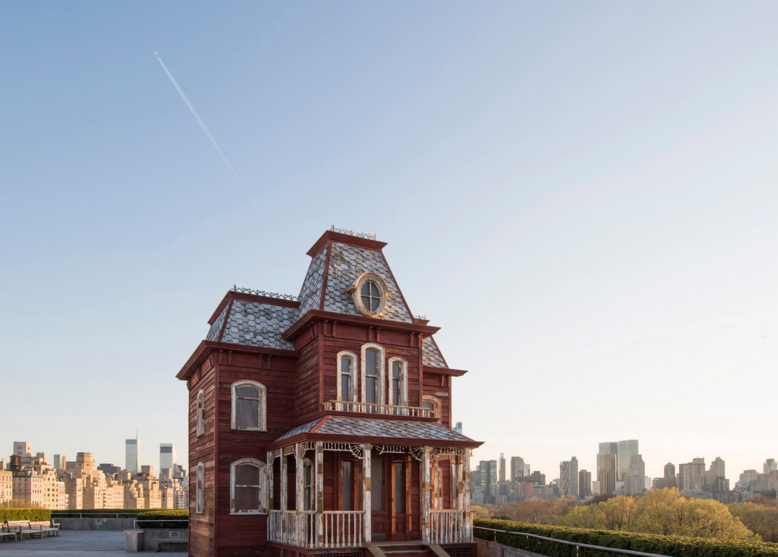 The Metropolitan Museum of Art’s rooftop garden has been a site for art and architecture shows for nearly 20 years now, with varying degrees of popular success. But their newest installation will definitely reach a good level of popular acclaim.

“Transitional Object (PsychoBarn)” by Cornelia Parker is a departure from the British sculptor’s usual milieu – she’s well-known for crushing and exploding her works, not building them. But this one is a masterpiece of construction.

Parker’s work at the Met, which opened Tuesday, April 19, is a set-like reproduction of a decrepit Mansard-roofed Victorian mansion. A familiar one, to any film or horror buff. The two-sided, scaffold-supported faux house is a scaled-down reproduction of the Bates family home from Alfred Hitchcock’s 1970 thriller Psycho. Standing out vividly in the alleys of the rooftop garden, it looks out over the vista of Manhattan, a powerfully evocative and familiar silhouette straight out of the American awareness.

Built of salvaged wood from a 19th century barn in upstate New York, Parker’s setpiece was built by herself and Showman Fabricators, a Long Island City company that makes sets for Broadway theaters. They worked as closely to scale as they could without obscuring the origins of the materials. For instance, most of the house is painted an ancient, flaking red, but bare swathes of wood show where feeding troughs crossed the walls of the barn stalls where the boards originated.