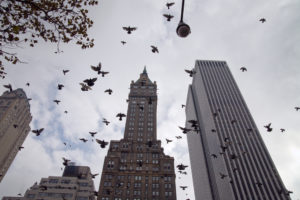 200 more pigeons almost sounds like the last thing that New York City needs. But not when those pigeons are made of fused glass, decorating unlikely spots like lamp post skirts and bus stop shelters.

The artist known only as GB began as one of New York’s many souvenir vendors, making the glass pigeons and other larger pieces as a tongue-in-cheek kind of piece of New York for tourists to take home with them. Each one is made of cut colored glass fused into a mesh to hold its shape. They’re about the size of the real deal (but much cleaner) and come in any design that catches GB’s fancy.

“The project started from my desire to create art without worrying about what was going to happen with it after I was done,” she said, referring to her project to decorate the city with her wares, for free. She wanted to be able to make them without having to focus on their sale-value.

As of the end of August, she’s snuck 64 of them out onto the streets, mostly gluing them to lamp skirts. The first one was in her own neighborhood, Bay Ridge, but since that one, she’s put them in nearly 20 other districts of New York City, each in a place that holds particular meaning to her. When one was to be removed by the city, she managed to save it and sent it on even greater adventures. That one, Pigeon 8, an attractive green mosaic of a bird, retired to a street lamp in Tamarindo, Costa Rica, where GB went on cruise.

GB’s goal is to have spread 200 pigeons by September 21st, the end of summer. She still has more than a hundred to go, but she’s not worried.

“It’s just really all about having a good time and spreading some color around the city,” she said. She encourages anyone who finds one to look for more, and to tag the artist on Instagram at @gb_pigeon_nyc.