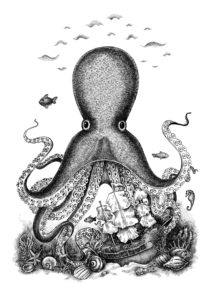 The monument is a modest one, as disaster memorials tend to be; a chest-high marble plinth topped by an evocative bronze sculpture of the event itself cast in rich detail and fronted by an informational plaque. It’s dedicated to the 1963 sinking of the Staten Island Ferry by a giant octopus just off the shores of lower Manhattan. A nearby sign points the curious to a website about the event, and fliers promote a fundraising effort to commission a memorial museum.

But of course, no Staten Island Ferry was ever sunk by a giant octopus, particularly not the ship-sized kraken depicted in the bronze-work. The whole memorial and the fictitious fundraiser are all the work of artist Joe Reginella, a local freelance sculptor.

Reginella spent 6 months putting together the artistic prank, including putting together the website and Facebook accounts, getting friends and family to write testimonials, building the memorial, and creating a short “documentary” about the disaster. He describes it as “part practical joke, part multimedia art project, part social experiment.”

While a little critical thinking is usually enough to debunk the detailed accounts of the nonexistent disaster, some people follow up by asking about at it the nearby Staten Island Museum, according to Francesca Navarro, who works there at the front desk.

“I think they maybe have a suspicion it’s fake, but they feel like they just have to prove it,” said Navarro in a phone interview with the Washington Post.

Reginella says that there’s nothing malicious about his pranking, and most people enjoy the joke, but some people get “agitated” about it. One woman even tracked down his phone number to lecture him over the phone about unnecessarily worrying people.

“How can you get so bent out of shape?” he said about that woman. “It’s a joke.”

And it’s a good joke. Hopefully, Joe Reginella, who also created a Jaws-themed baby cradle that garnered viral attention in 2015, will continue to exercise his considerable sea-themed creativity for public amusement in the future.