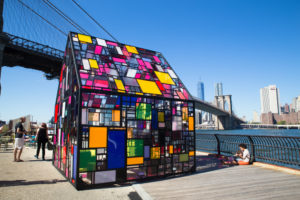 Art in Odd Places (AiOP) is an organization about putting or performing art in unexpected ways, in unexpected places, with a goal of sneaking art in where it is not technically allowed. It was formed in 1996 in Atlanta by a group of artists who saw a reduction in public spaces and in public rights in those spaces. In 2005, it moved to New York City, where it lives on today. Its mission is to remind the public that public spaces exist for the purpose of “diverse social interaction and the unfettered exchange of ideas.”

Every October, Art in Odd Places produces a festival along the length of 14th Street in Manhattan, NYC.

This year, the theme for the festival is race. The setting of the festival crosses Union Square, one of the most notable sites of gentrification in the city, so it is particularly apropos. Before Union Square (the intersection of Broadway and 4th Avenue) became the hub of tourist and artistic culture it is now, it was a residential neighborhood, mostly occupied by people of color.

The festival features more than 30 installations, performances, and film projects. Some are mobile, some stay put, none are behind doors. Some are deceptively simple, like Eric Olson’s bubble machine Imagine. It looks like a simple party toy, but it references the voting discrimination of the Jim Crow era, when a black man registering to vote could be asked unanswerable questions like, “How many bubbles in a bar of soap?” and turned away for failing the “test.”

Some are unbelievably intricate, like artist Dominique Paul’s illuminated dress. As Paul walks up 14th Street, the dress will change colors based on the income level of different blocks. Viewers are invited to walk along with Paul, exploring the area for themselves while talking about income inequality.