“Subway Therapy” Has Made Quite the Impact 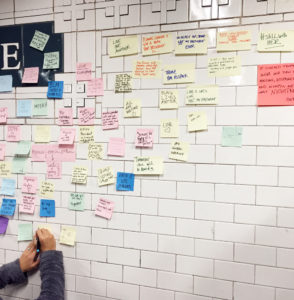 The walls of the Union Square subway station in Manhattan are usually decorated by ad space—glossy posters of models and sets, products and premieres. What decorates them now is about as far from that as can be. “Subway Therapy” began in the hours immediately following the election results on November 8th. It’s art by the community.

Initiated by artist Matthew Chavez, the message-board style post-it-note statement has grown into a massive, multilayered fluttering thing, with thousands of messages from locals, tourists, and officials sharing their feelings about current politics. The sticky-note display was immediately beloved by commuters and the Internet alike, from the first pictures that emerged of notes placed tidily one per tile, to the photos only a day later of whole yards of the station covered entirely.

By Tuesday, November 29th, the collection of notes covered the entire length of the platform, several layers deep, and was still growing. So when a few passersby noticed that swathes of the notes were being taken down to place a new round of advertisements, they immediately broadcast their displeasure via Twitter.

The notes were being removed to make space for a set of ads for Sonos, a music store that markets itself as being for “audiophiles.” Sonos had purchased the ad space months before, as part of their national campaign to support the opening of their first brick-and-morter store on nearby Greene Street. But the intrusion into “Subway Therapy” was going to get them anything but good publicity. Before their ads were even placed, they were trending on Twitter with rumblings of boycott.

Instead of asserting their contractual rights to the space, however (Chavez, for the record, had no permission to begin “Subway Therapy,” though the wall he used was empty at the time), they backed off and ordered a stop to their own ad placement. Instead, Sonos brought in a photographer to document as much of “Subway Therapy” as is feasible. They also announced that they would leave “Subway Therapy” in their featured ad space all month, as well as display their photographs of it in other space they’ve rented throughout the New York Subway system.

As of now, there is no time frame set for Subway Therapy’s official removal.