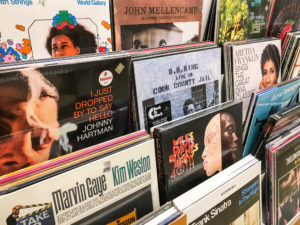 Simon Greenberg is a self-identified Manhattan native who grew up and went to art school in New York City. All throughout his life he’s been involved in the city’s art world, working in art galleries and album shops. Now he’s opening his own business, which is in a way a hybrid of both.

2 Bridges, which gets its name from its location tucked away in the Chinatown Mall beneath the Manhattan Bridge in Chinatown, is a retro music store that also hosts spaces for performance and exhibitions. Greenberg says he has in mind a space reminiscent of someone’s house, “putting music, art, and books into conversation with one another.”

“I thought a public space where those things were interacting made sense,” he wrote in an email interview with magazine Resident Advisor.

2 Bridges sells vinyl both new and used, cassette types, books, and art. Its musical inventory leans towards house, techno, jazz, rap, and its performances will most likely follow suit.

Greenberg intends to be selective about his inventory, wanting to preserve a kind of collection feel to it all. From his email interview:

“There’s a really natural crossover between something on The Trilogy Tapes with a Francois Bayle record or a book on Islamic ornamental design. A cassette on Orange Milk or NNA has something to do with books about the philosophy of time, or post-capitalist ideas about digital utopias. Mark Fell’s music has a lot in common with Thea Djordjadze sculptures and coral reefs. It’s all part of the same sort of experimental polymathic umbrella where these things are syncretic and aware and reacting to each other.”

So that is the atmosphere to be expected at 2 Bridges, which opened this past month. It can be found at 75 East Broadway, Suite 205, Manhattan. Drop in, take a look, and join the conversation in one of New York City’s newest art spaces.