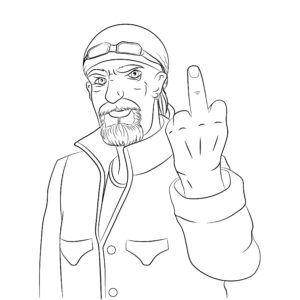 For the last decade, a closed storefront on Essex Street has sported a vividly rainbow painting of a skull on its front door and a sign declaring itself to be the Clayton Outlaw Art Museum (COAM). But there are no lights and no visitors. While artist Clayton Patterson has lived above his defunct gallery all this time, the space has been closed.

In the late ’80s and early ’90s, the COAM hosted exhibitions and work by fringe New York City artists like Spider Webb, Jim Power, and Dash Snow. Patterson and his wife Elsa Rensaa padded out its content with a collection of photos, videos, and memorabilia about punk culture, spanning topics from tattoos to riots.

Patterson has spent more than a decade documenting the changes and evolutions of his beloved neighborhood through art and photographs.

Now, the Clayton Outlaw Art Museum is at last reopening its doors, with a re-inaugural exhibition featuring art and curios from their ever-growing collection. A book of Patterson’s photos shows the 15-year growth of Essex Street, and a collection of Patterson’s artistic Clayton Caps.

The reopening isn’t Patterson’s only work. He collaborated with local rock band DAMEHT. At the center of all of their priorities is the creative lifestyle of the Lower East Side, and preserving that against the forces of either poverty or gentrification.

Another priority for Patterson is using the space of his art museum as a dialogue box to foment conversation with locals and continue to learn more and more about the microcosm in which he lives and works. He never wants to close his museum again.

Those interested will find the Clayton Outlaw Art Museum at 161 Essex Street. It’s not hard to find, just look for the door with the rainbow skull with the sunflower in its eye. Patterson will probably be sitting at the front table; you’ll recognize him by the belt-length beard.