Museum of Modern Art Gets Political 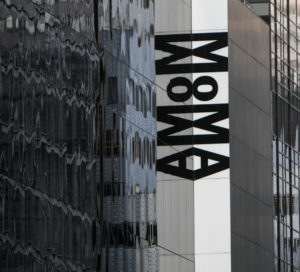 The Museum of Modern Art has, on occasion, touted itself as apolitical. While the art they house is often far from neutral, they have tried to do so from a so-called unbiased perspective. But they, like much of America, do not feel they can remain in a fictional ivory tower in these days.

When President Trump’s immigration ban was being protested in airports, unions, and streets all across America , MoMA staged a strong statement of their own. They disrupted their permanent-collection galleries (the narrative of Western Modernism that is most of their collection) to feature contemporary art from the Middle East.

Each featured work will be in its new home for several months, alongside a text specifically defying the President’s actions.

“This work is by an artist from a nation whose citizens are being denied entry into the United States, according to a presidential executive order issued on January 27, 2017. This is one of several such artworks from the Museum’s collection installed throughout the fifth-floor galleries to affirm the ideals of welcome and freedom as vital to this Museum, as they are to the United States.”

Picasso’s “Card Player” has been replaced by “The Mosque” from Sudanese painter Ibrahim el-Salahi. “Mon Pere et Moi,” by Iranian artist Charles Hossein Zenderoudi hangs now in the Matisse gallery, between “Dance” and “The Piano Lesson.”

The pieces displayed and the pieces removed have each been very carefully chosen by three of MoMA’s curators, Christophe Cheriz, Jodi Hauptman, and Paulina Pobocha. These disruptions say something very specific: that the timeline and collections of a museum are not accidents of history nor irreproachable, but are deliberate stories told about the world in which art lives, by people who choose what stories are worth telling. This is history in the making.