Meet ‘Pricasso’: The Artist Who Uses His Penis as a Paintbrush 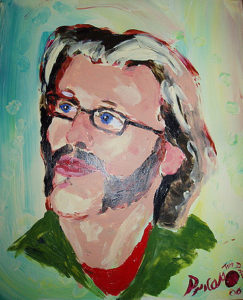 A portrait painted by the infamous “Pricasso.”
Photo courtesy of Charlie Brewer at Flickr Creative Commons.

Yes, this is real. No, we’re not joking. There is legitimately a man who paints with his penis.

His name is Tim Patch, but he prefers to go by the name “Pricasso.” He’s a 68-year-old man from Australia and believe it or not, his artwork is pretty good!

But his penis isn’t the only body part he paints with. “Pricasso” also paints with his buttocks and testicles. He’s made quite the name for himself at sex trade shows, where he creates and sells personalized portraits. Take a look at his gallery here.

His work has become so popular that he now runs his own website where he is able to ship his artwork to anywhere in the world. Portraits range anywhere from $199–$1,000.

“The orders I get through the website are mainly from America. People email me a photo and I paint it and video it while I do,” Patch explained in an interview with the New York Daily News.

The videos offer customers evidence that it is an original painting by the one and only Pricasso. The accompanying videos come in three different ratings: G (genitals not shown), PG (flaccid penis shown), and 18+R (erect penis shown).

“Flaccid is best to paint with as you can stretch it, bend it and squash it,” Patch revealed. “After a few months, it becomes so normal to paint in front of hundreds of people I don’t get turned on at all anymore, unless someone wants a photo holding it or they want to try painting a few strokes with it, then it all gets a lot harder.”

Patch first started his penis painting business at the ripe age of 54 and so far, it’s been pretty darn successful. Say what you will about him, but the infamous Pricasso is a walking, talking, breathing example that a person is never too old to chase their dreams.