Before Adele, There was Mama Cass 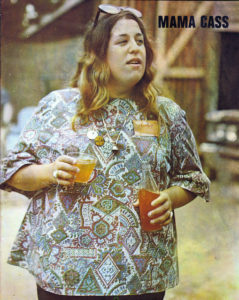 Adele will go down in history as one of greatest singers of all time. Her rich, dark, powerful contralto voice has set her apart in an industry dominated by sopranos. Even her full figure—which has long-since been criticized in the mainstream media—is a breath of fresh air. Adele challenges the status quo, and that’s precisely what makes her such a remarkable artist.

But before there was Adele, there was Cass Elliot (AKA Mama Cass). She was best known for her role in the 1960s hit band The Mamas and the Papas.

Much like Adele, Mama Cass had a robust, sonorous voice that set her apart from the crowd. Her voice was so powerful, in fact, that it often overshadowed that of lead singer Michelle Phillips.

And yet, Phillips still retained the spotlight. Why? Because she was thin, she was blonde, and she had pretty green eyes. She fit the mold of the conventional beauty standard perfectly.

Mama Cass, on the other hand, was a heavier set brunette with deep brown eyes. The fact that she was the most talented in the group didn’t matter much because society couldn’t get past her weight.

She was the subject of many a cruel jokes, even leading up until her death in 1974. After she had passed, someone spread a vicious rumor that she died by choking on a ham sandwich. This is not true, of course. She died by way of a heart attack.

But for as tough as it was being an overweight woman in the 1960s, Cass owned it to the best of her ability. In 1967, she posed nude for Cheetah Magazine in what is now considered an iconic poster. Ladies and gentlemen, Mama Cass was badass.

Without her, there’s no telling whether we would even have artists like Adele. Mama Cass really set the stage for diversity and uniqueness. She dared to challenge the definition of beauty and talent.

She didn’t get her fair share of credit at the time, and that’s a damn shame. She deserves to be recognized not only for her musical contributions, but her contributions to society as well.