60 Public Pianos to be Placed Throughout NYC 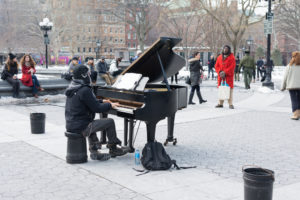 “New York City is the cultural capital of the world–and yet too many residents lack regular and affordable access to high-quality arts programming,” a statement from their website reads.

As a small part of their effort to correct that deficit, they’re placing 60 art-piece pianos throughout the city for the peak of the summer. Any passerby may play them at will, but the goal is for accomplished amateurs and professionals alike to volunteer their time in free public performances. So far, ten have been scheduled and more are anticipated.

The pianos, each painted vividly by local artists and celebrities, will debut in a massive piano performance by 60 pianists of Bach’s Prelude in C.

Jon Batiste, bandleader of The Late Show with Stephen Colbert, will be the conductor. The event will be held on June 5th at noon, at 28 Liberty Plaza. After that, the instruments will be dispersed to parks throughout the city from June 5th through July 25th, after which they will be donated to interested public schools.

Sing For Hope calls their piano exhibition the largest recurring public art project in New York, interacting with more than two million people a year. This year’s pianos will bring their total to over 400 in six summers.

The painted pianos this year feature work by Kate McKinnon, many Broadway casts, high school art classes, the cast of Sesame Street, and many more. Find the complete list here.

Beyond the roaming pianos, Sing for Hope also coordinates a roster of all types of performing artists, coordinating their volunteer hours with under-served schools, community and senior centers, and hospitals.

“We believe that the arts heal and access to the arts is a right, not a privilege,” a statement from their website reads. A bold premise and a fantastic mission indeed.