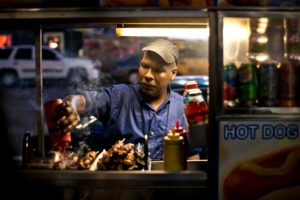 There’s something special about street food in New York City, and it’s not really the food at all. It’s the people, the tough-as-nails community of vendors running the cars and vans that sell hot dogs, pretzels, crepes, and gyros. They hawk their goods on strategically-chosen corners, some staking out a particular site for years at a time, even decades.

And by and large, they’re invisible. Even though street-cart hot dogs are one of the city’s iconic experiences, few locals could name the vendor they buy from every single day, or even describe the cart.

This is what Michelle Hessel wanted to tackle. Hessel is a research resident at New York University. She is currently enrolled in their Interactive Telecommunications Program, and she’s also an artist. She followed three vendors’ stories with her installation, “Hidden in Plain Sight,” to share them with their own city and the world.

Thiru Kumar sells vegetarian dosas (A South Indian type of crepe) in Washington Square Park. He’s from Sri Lanka, and used to give diving lessons. Moroccan Dany Hassan sells bagels at Broadway and Waverly Place, but hopes to quit soon to go back to school for biology and to enjoy his new marriage. Ana Harrera has sold tamales out of a cart in Queens for 17 years. She’s from Ecuador.

In “Hidden in Plain Sight,” each vendors’ story is told in their own words while digital imaging projects an illustration of their story onto a 3-D printed version of their cart, including detailed models of themselves.

In “Meet Adam,” a separate installation, Hessel’s crafted a virtual tour of a fourth vendor’s cart. Adam sells coffee from a small, colorful trailer. In virtual reality, viewers can enter it, look all around, or come face-to-face with the man himself, in the actual environment of his corner.

On Hessel’s website, there are more in-depth interviews with all of her subjects, along with pictures and a detailed breakdown of her artistic process.