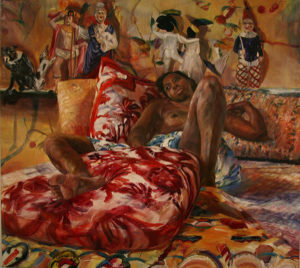 The Hang Man Has Gone to Wash, The Soldiers to Eat, We Are Left Alone With Our Feat by Natalie Frank.
Photo courtesy of Mark Barry via Flickr CC.

If there’s anything that the #MeToo campaign has taught us, it’s that sexual harassment is so pervasive that it affects nearly every industry imaginable. And yet, there are still some industries in which we expect this type of behavior more so than in others. In the art world, for example, we don’t expect it as much because we tend to view creative types as respectful, open-minded, and socially conscious. But as New York-based painter Natalie Frank points out, sexual harassment is as much a problem in the art world as it is any other field.

In a recent op-ed published in ARTnews, Natalie Frank went as far as to compare the art world to being a “minefield” for female artists. Citing her own experiences with sexual harassment, Frank said that influential figureheads have used their positions to belittle her.

“Throughout my career, I’ve had run-ins with men in positions of power in that world who have behaved inappropriately, with impunity,” Frank wrote. “While none of these rises to the level of what Weinstein’s subjects experienced, they have nevertheless made me feel small; they’ve frightened, degraded, and intimidated me.”

Her first encounter happened ten years ago, when Frank was in her early 20s. A graduate student at the time, an older successful photographer came to visit her at her studio.

Upon examining the sexual themes within her work, the photographer proceeded to make a series of lewd comments, such as, “I can tell what kind of girl you are… I bet you like your boyfriend to tie you up, I bet you like it rough.” He then leaned toward her and said, “You know what you need? You need to be fucked up the ass.”

The photographer then asked for her notebook. When she handed it over, he wrote “25 nude self-portraits by this date” followed by his email address. Frightened and in shock, she was silent at the time. Looking back, she regrets not saying, “Get out of my studio.”

Another notable encounter happened right after she finished graduate school. Just as Frank was about to have her first New York solo exhibition, an art critic by the name of Charlie Finch wrote an article about her. It was titled “The Seduction of Natalie Frank.”

In the piece, Finch described her as “a young, virginal star.” He also wrote, “In the heat, Natalie sweated through acrylics and oils in a wife beater shirt for twelve hours at a time. At our direction, she would wipe away days of work in a flash to add a cascade of decaying flowers or some phallic armature.” Another art blog compared her piece to a date rape. Frank said it made her feel disgusted, objectified, and humiliated.

Another time, an older, married gallery owner asked her if she would like to “fuck” during a dinner with 15 other people around. She later reported his misconduct, and was told he did that often. “We won’t seat him next to women next time,” they responded.

Because her work is often centered on sexuality, people often think that gives them the right to make salacious comments. But Frank wants to set the record straight once and for all:

“The content of my paintings does not give you permission to harass me.”

Indeed, if there’s one thing that other female artists can learn from this, it’s that there is no justification for sexual harassment. No means no. On that same token, silence (or the absence of “yes”) also means no.