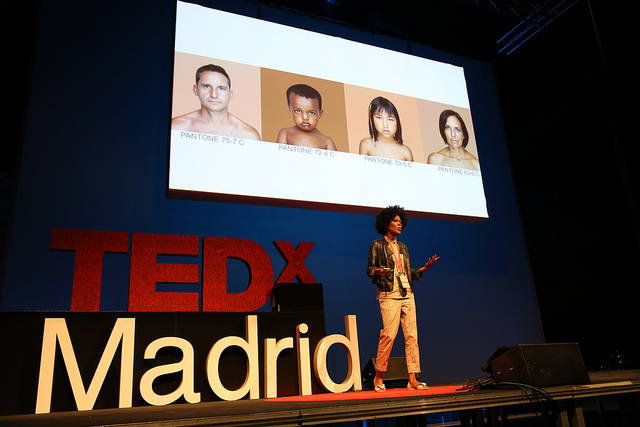 From to-go cups to USB flash drives, Pantone products are booming in popularity. The company is best known for its proprietary color-matching system used in fabrics, plastics, and paint. But Brazilian artist Angelica Dass, who describes herself as an “activator more than an activist,” used Pantone swatches to match Pantone colors to something else: skin tone.

Dass photographed over 4,000 people since 2012 to match their skin tone with a Pantone printing color chart as part of her project series titled, “Humanæ.”

According to artnet News, the project, “… focuses on the idea of race as a social construct, rather than a biological one.”

Drawing attention from around the world, Dass’ series has been featured in National Geographic and inspired her 2016 Ted Talk on the subject of skin color and ethnic identity, and whether the idea of white, red, black, and yellow reflect “humanity’s true colors.”

Upon closer inspection, Dass uses only 11 x 11 pixel samples from a subject’s nose to determine the color of the Pantone backdrop for the portrait. Her subjects wear no upper-body clothing and the photograph is taken from the shoulders up, so that the main colors in the series come from the subject’s skin tone. In addition, below each portrait is an official Pantone number. Artnet News reveals Dass’ own Pantone skin tone: 7522 C, a warm brown.

Dass was inspired to begin the project after she and her Spanish husband got married and, “… people began speculating about what Dass’ children with her Spanish husband might look like…,” according to National Geographic. And so, Dass’s first photograph subjects were her own family.

However, the artist wasn’t able to fully complete her project as she wished because Pantone’s library has only 1,867 colors. Even still, the project is, “… infinite and unfinished,” Dass told CNN.