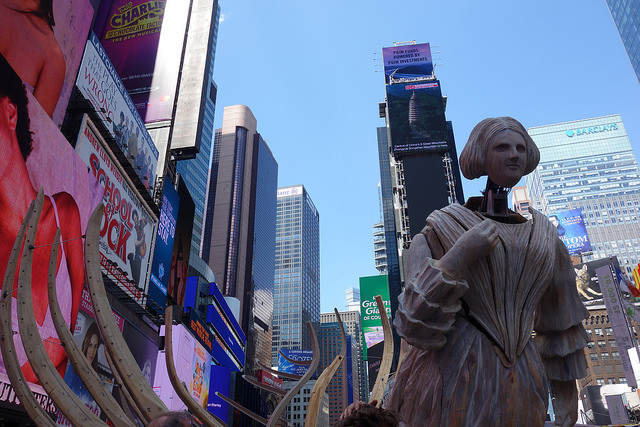 One of the pieces, “Wake,” is a 60-something-foot animatronic sculpture that portrays a wrecked ship or a marine mammal, depending on how you look at it. On the bow, a figure likened to a 19th-century New York opera singer, Jenny Lind, nods at passersby as her chest quietly expands and compresses as if she were really breathing.

Lind, who was known as the “Swedish Nightingale,” acts as a metaphor for the USS Nightingale, a slave ship that was named after her.

“Alluding to New York’s evolution as a cultural hub and the history of slavery in the U.S., the work signals different specters of the past,” writes ArtNews contributor Claire Selvin.

The other piece, “Unmoored,” takes on the issue of climate change. Viewers experience the work by putting on Microsoft HoloLens headsets. Those who wear the headsets are immediately immersed into an apocalyptic scenario—one where New York has been submerged in water. The four-minute sequence includes a fleet of ships and sea creatures in the bustling New York landscape.

“Unmoored” and “Wake,” by artist Mel Chin, are part of a multi-site exhibition called, “All Over the Place.” The works will remain on display until Sept. 5, 2018.

For the duration of the exhibition, visitor pamphlets will be handed out that include information on climate change. “In 100 years, scientists predict that the sea level could rise six feet in New York City,” reads a portion of the pamphlet.

During the opening of the exhibition, Chin explained the significance of his work:

“It is about the spirit of friendship to provoke the essential questions of our time.”