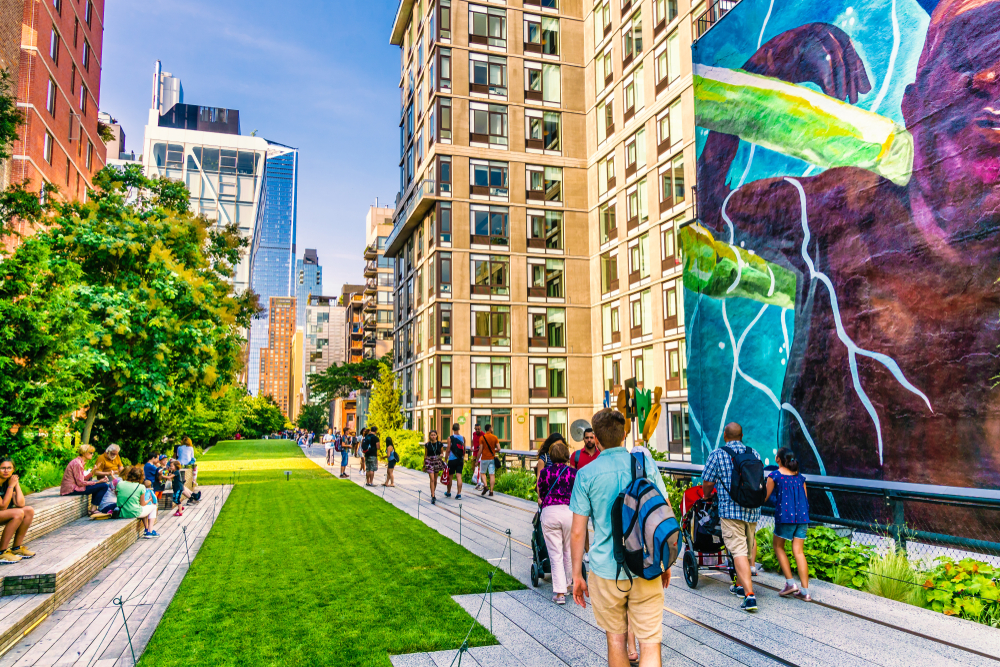 Who says public spaces have to be solely functional? Artists who are showcasing their work at the High Line in New York, a former train track turned garden walking path, sure don’t think so.

“Agora,” an ever-changing group exhibit featured in the park until March 2019, borrows its name from the Greek term meaning, “the square”—a public gathering place in old city-states. Artists taking part in the gallery have transformed this public space into art arenas that are equally functional as they are intriguing.

“By manipulating our expectations of what does and does not belong in these ostensibly collectively owned spaces, artists challenge what public spaces are, how they’re made, and who they’re made for,” reads the gallery website.

Featured work varies wildly, from massive parades to small secretive performances, and bronze statues to pavement etchings. You never know what you’ll find on your walk.

Artist Marinella Senatore adds to “Agora” with her light installation, “Give Your Daughters Difficult Names.” The surrounding architecture is decorated with neon colors, in what ARTnews contributor Andy Battaglia called a “feast for the eyes.” The stunning display is one of four light installations in “Agora.”

Another artist, Timur Si-Qin, takes a very different approach in, “Forgiving Change.” Si-Quin uses natural elements, such as wood and foliage, to create a green space surrounding a sort of altar. However, upon closer inspection, the altar is made of burnt wood.

Other artworks on the High Line include a human body sculpture made from various materials, including gold, wood, garbage, shells, and more. Then there’s “Ironwoodland,” which mimics the famous “Hollywood” sign. There’s also teepee buildings grounded by giant boulders.

But if visitors come back in a few months, they may very well return to something different. This display changes as often as the seasons, and tourists and locals alike are bound to find new inspiration with every visit.