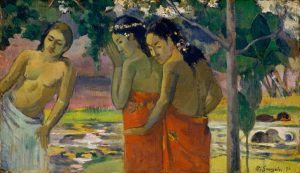 What do Picasso, Balthus, and Gauguin have in common? Aside from being some of the world’s most celebrated artists, all three derived much of their success from exploiting the female gender.

Balthus, for example, sexualized prepubescent girls—who were the subjects of many of his highly prized works. Gauguin was a pedophile who had three child brides in Tahiti. And Picasso, who was notorious for his infidelity, once called women “machines for suffering.”

The question is: By continuing to display their works and pay tribute to their namesake, are museums, in effect, romanticizing exploitation? Chicago-based artist Michelle Hartney says yes—if museums purposefully omit this information.

“Providing biographical information about artists on wall labels is a common practice with museums, but when it comes to sexual violence, gross sexism, or racism, the museums, curators, and critics are often choosing to eliminate this information,” Hartney explained. “It results in them taking control of the narrative surrounding male artists, such as Picasso, Gauguin, Chuck Close, and many others.”

In response to this issue, Hartney has launched her own project, Correct Art History, in which she posts her own wall labels to call out abusive artists when museums will not. She recently did this during a visit to the Metropolitan Museum of Art in New York, in which she placed a label beside a Gauguin painting without asking the museum’s permission.

To be clear, Hartney is not advocating for censorship. Rather, she is pushing for this information to be brought to light rather than swept under the rug.

“We need these works of art to remain in museums so we can learn from them,” Hartney said. “Educating and presenting the truth is how we learn and do better; this information would be a powerful educational moment because it will show how long the patriarchy has ruled over women.”