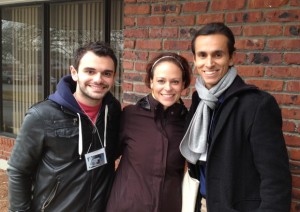 With ten years of experience planning and building arts education programs for diverse communities, Mauricio Salgado is currently the Director of Domestic Programs at Artists Striving to End Poverty (ASTEP). As a founding member of ASTEP, Mauricio recruits and trains volunteers who will serve in ASTEP’s domestic programs and manages and evaluates current partnerships while researching and developing new programs. Originally from Miami, Florida, Mauricio graduated with a BFA from The Juilliard School. Recent appearances include Michael Kahn’s production of Love’s Labours Lost with the Shakespeare Theatre Company, The Cenci at Ohio Theatre, the title role in the Kaai Theatre [Brussels] production of Philoctetes, and the premiere of Marco Ramirez’ Mermaids, Monsters and the World Painted Purple at the Kennedy Center. Mauricio has been invited by organizations around the world (the Dominican Republic, South Africa, Peru and India) to teach the ASTEP methodology. In March of 2009, he was presented with the prestigious Martin E Segal Award in recognition of his work with ASTEP.