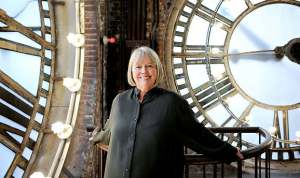 Alanna Heiss was born in Louisville, Kentucky in 1943, and made the pilgrimage to New York City after receiving her BA from Lawrence University. It was in NYC where her grand, artistic visions were realized in the form of unconventional art galleries and installations all around the city. Heiss was a pioneer of the “alternative space movement” of the 1970s, in which artists would utilize noncommercial buildings and even public places to host exhibitions.

Her larger-than-life visions for art installations are very much indicative of the energy and passion that this imaginative curator exudes. She has worked independently, collaborated with renowned artists from around the world, and with major arts institutions, treating New York City as a blank canvas and exploring new ways to utilize unconventional spaces. Her desire to literally push the boundaries of site-specific installations led her from warehouses and factory lofts, to the Brooklyn Bridge, and beyond.

In 1971 Heiss organized “Under the Brooklyn Bridge,” an outdoor exhibition that featured the works of the most innovative contemporary American and European artists. One year later, Heiss founded the legendary Clocktower Gallery, an art gallery designed to host artist residencies, contemporary installations, and groundbreaking works in its unusual, yet iconic space in Manhattan. Heiss continues to help the Clocktower Gallery flourish as its primary curator and creative director, and revitalized the space completely in 2008 with the formation of ARTonAIR.org, an online streaming arts radio program that seeks to make innovative art accessible for all. 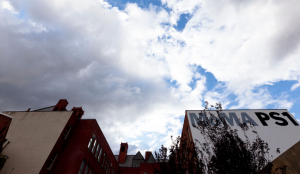 One of Heiss’ most known achievements is her creation of MoMA PS1 Contemporary Art Center, an affiliate of the Museum of Modern Arts that arose from the Institute of Art and Urban Resources. Much like her other visions, MoMA PS1 continues to thrive as a space dedicated to featuring the newest, most groundbreaking works from artists worldwide, while paying homage to the alternative space movement that it evolved from. MoMA PS1 continues to draw in audiences and is one of New York City’s most prolific nonprofit arts institutions. Heiss founded the exhibition space in 1972, and served as its Director until 2008.

Since she emerged as one of the most ambitious and creative artists in NYC in the 1970s, Heiss continued to curate incredible shows over the next few decades, collaborating with some of the biggest names in the art world. She has received numerous honors throughout her career including the Mayor’s Award for Contributions to the Artistic Viability of New York City, the Royal Swedish Order of the Polar Star, the CCS Bard Award for Curatorial Excellence, and the prestigious French Chevalier des Arts et des Lettres, among many others. The New York Times says Heiss “is on fire, spitting in the face of anything having to do with retirement, and hopping up the stairs of her gallery with the agility of a mountain goat. She has no interest in looking back, despite the giant clock that looms over her domain,” of Heiss in her Clocktower Gallery.

Indeed, the legendary visionary is showing no signs of slowing down, and will continue to find new ways to innovate the art world of New York City.