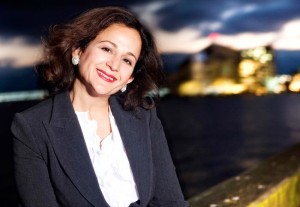 Atefeh Riazi graduated from Stony Brook University with a degree in Electrical Engineering. She is a successful Information Technology (IT) executive as well as a compassionate philanthropist.

From 2011 until 2013, Atefeh Riazi was  the Acting General Manager for New York City Housing Authority (NYCHA). Her position there required her to oversee over 400 community facilities in New York City, manage a massive $3 million budget, and provide guidance to the IT Department at NYCHA.

Ms. Riazi worked to bridge the technology divide between NYCHA’s residents and the general population, supporting initiatives such as the Digital Vans project, which brings free wireless and laptops to NYCHA residents. She is well known for her commitment to bringing large-scale innovative and successful technology-based projects to communities. She has been ranked in the top 100 of global CIOs.

Atefeh Riazi is also the Executive Director of Chief Information Officers (CIOs) Without Borders, which is a non-profit organization devoted to bringing good to humanity through technology and innovation. She decided to start the organization after being the global CIO for Ogilvy & Mather, a role that required her to travel around the world.

Through her travels, she came to realize that many developing countries did not have the technology necessary for proper healthcare and education. This experience ignited her inner compassion and pushed her to start CIOs Without Borders in an attempt to bring IT to communities in need. The organization currently has projects in Rwanda and Vietnam, as well as additional projects in the works.

Ms. Riazi is dedicated to using her influence and knowledge of IT to better all of humanity. As she continues to work with communities both domestically and globally through CIOs Without Borders, it will be interesting to see what initiatives, changes, and successes she will spearhead.