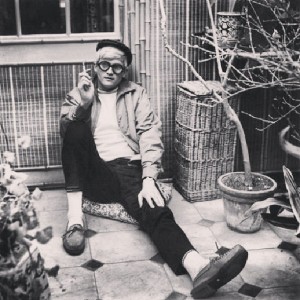 Photograph of a young David Hockney.
Image: bpristina via Instagram

Artist David Hockney has received considerable amounts of acclaim recently, and not for his famous oil paintings, but surprisingly, for artworks created on an iPad.

You might be wondering why such an important contributor to the Pop art movement, a master of artistic mediums such as printmaking and photography, might be using paint applications to render artworks on a tablet. For Hockney though, he’s just happy to have access to a new, albeit somewhat controversial, way to paint. In an interview about his newfound love of creating iPad paintings, Hockney said, “It’s a very new medium…I’m pretty amazed by them actually.” The seasoned artist appears to be using digital paint applications simply as a way to explore modern ways of creating art.

Many art critics and historians aren’t as enthralled by Hockney’s iPad paintings in the same way that much of the public is, and some have even referred to the new works as “gimmicky.” However, it is important to consider that Hockney was a pioneer and innovator during the Pop art movement, creating works like none had ever seen before, which drew in admirers, as well as skeptics. Perhaps his new technology-influenced approach to art is similarly avant-garde; could it be that Hockney’s iPad paintings are to the 21st century as Pop art was to the 1950s? 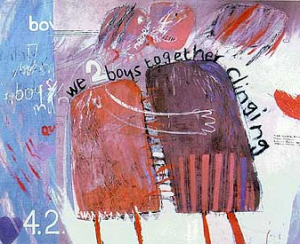 Hockney himself is aware of the criticism surrounding his newfound art medium. He jokes, “People from the village come up and tease me: ‘We hear you’ve started drawing on your telephone.’ And I tell them, ‘Well, no, actually, it’s just that occasionally I speak on my sketch pad,’” of his iPad paintings. Reportedly, the artist has been using his iPhone and iPad to create new works for the last five years, completely unaffected by critics.

On October 26th, 2013, San Francisco’s de Young Museum welcomed Hockney in what has been billed as the museum’s largest exhibition to date. “David Hockney: A Bigger Exhibition” is a survey of works from the artist since 1999. According to the de Young Museum, the exhibition will include “monumental paintings, Photoshop portraits, digital films that track the changing seasons, vivid landscapes created using the iPad, as well as never-before-exhibited charcoal drawings and paintings completed in 2013.” There will also be “Large-scale, multi-canvas oil paintings and digital movies shot with multiple cameras, some requiring as many as 18 monitors for their display.” The survey of Hockney’s latest work is a diverse and expansive display of the artist’s innovation and talent.

David Hockney has been a cultivator of culture throughout his entire life. He has a distinct artistic style in every medium he works with, from oil painting, to printmaking, and even paintings created with his fingers on an iPad screen. Hockney is considered to be one of the most influential British artists of the 20th century, and his foray into the world of art and technology continuously places him in the category of “innovator.” The art world is lucky to have in it such a genuine, forward-thinking presence, and it will be interesting to see how Hockney will apply developing technologies to his art in the future.