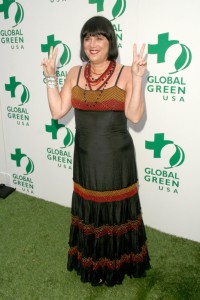 If you’re familiar with Eve Ensler’s work, at one time you might have found yourself asking, Is there anything this woman can’t do? Ensler has gained attention for being a best-selling author, award-winning playwright, public speaker, women’s rights activist, as well as a columnist for multiple publications. An outspoken feminist, Ensler has dedicated her life to raising awareness about domestic and global violence against women, implementing creative and investigative writing to convey her important message.

Throughout her career, Eve Ensler has worked to marry the arts with activism. This is exemplified in her most well known play, The Vagina Monologues, which features a series of monologues inspired by interviews Ensler conducted with real women. What began as a small, Off-Broadway production, has now been translated into 48 languages, and performed annually at hundreds of colleges and theaters internationally to raise funds and awareness about violence against women. The Vagina Monologues can be found in the form of a book, as well as onstage, and inspired “V-Day,” Ensler’s social justice initiative that has raised over $90 million for women’s groups in its fourteen years.

Besides her work with The Vagina Monologues and V-Day, Eve Ensler has published New York Times Bestselling books such as I Am an Emotional Creature: The Secret Life of Girls Around the World, and Insecure at Last, a political memoir. She has also written many articles for publications such as The Guardian, The Huffington Post, Glamour Magazine, Marie Claire Magazine, and a regular column in O Magazine. She is an active public speaker, traveling internationally to perform readings about her activist work.

Eve Ensler’s experience in disadvantaged parts of the world inspires her work to call on her audience’s responsibility to be active in creating social change. Newsweek honored her in their list of  “150 Women Who Have Changed The World,” recognizing that Ensler is as much an activist as she is an artist.