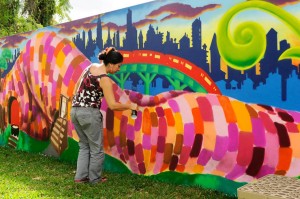 Sandra Fabara, aka Lady Pink, is one of the most prolific artists in the subversive, often controversial world of urban and street art.

Lady Pink was born in Ecuador and raised in Queens, New York, where she earned a reputation for being able to keep up with the boys in a subculture where very few women were visible. As she explains, “You have to fight tooth and nail, bitch and scream, be loud and be large to get respect,” of the years that she spent cultivating her signature style while trying to fight gender stereotypes. Lady Pink began painting subway trains from 1979 to 1985, an era that coincided with the burgeoning women’s movement and its more radicalized take on the female presence in society. Without fully realizing it at the time, Lady Pink became a strong ally to the movement; she constantly proved that in the world of street art, women could have just as strong a presence as the men who often tried to force them out.

She discusses how the second wave of feminism in the 1970s influenced her attitude and her work, explaining, “The feminist movement was growing very strong and as a teenager I think it affected me without realizing that I was a young feminist. The more guys said ‘you can’t do that’, the more I had to prove them wrong. I had to hold it up for all my sisters who looked up to me to be brave and courageous and to prove that I could do what guys could do. We defend our artworks with our fists and our crazy courage.” 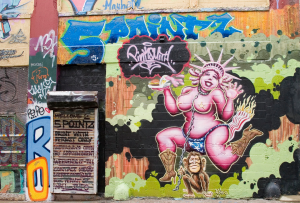 One of Lady Pink’s works at 5 Pointz in NYC.
Image: chaostrophy via Flickr CC

To this day Lady Pink has been a role model for other women in the street arts subculture, proving that gender doesn’t hinder anyone from becoming a strong artist. Brooklyn Street Art describes her as “an active role model to girls and young women around the world, giving them confidence to assert and explore their creative talents.” Her fearlessness and passion have allowed her to become a formidable presence in the urban arts scene, and an inspiration for many women around the world.

As the Brooklyn Museum explains, “Lady Pink continues to mature as an artist, producing ambitious murals commissioned for businesses and creating new paintings on canvas that express her unique personal vision.” From her artistic beginnings, painting graffiti on subway trains, to today when the artist commissions highly acclaimed works of art, Lady Pink has evolved as an artist, but hasn’t lost one ounce of her creative ferocity. Currently, she operates a small mural company that produces massive works around New York City. She works on canvas, and in public spaces, showcasing her range of talent and versatility. Many arts institutions have recognized her role as a street art pioneer, and her works can be found in impressive collections at the Whitney Museum, the MET, the Brooklyn Museum, and others.

For more information about Lady Pink and her work, visit her official website.