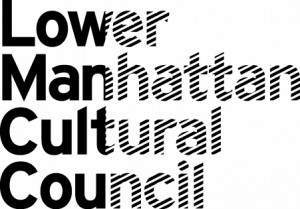 The Lower Manhattan Cultural Council (LMCC) is celebrating its 40th Anniversary year, and after four decades of advancing artists, transforming audiences, and changing New York City communities, it certainly has a lot to be proud of.  The LMCC is a nonprofit organization and a leader for the arts and culture of Downtown New York City and surrounding neighborhoods. The organization is dedicated to making Manhattan a thriving cultural hub, and has worked towards earning New York City’s Downtown area this reputation by producing cultural events and promoting the arts through grants, advocacy, and cultural development programs.

Flory Barnett, a prominent and successful local fundraiser, founded the LMCC in 1973. Barnett wanted to bring more arts and culture to New York City’s Financial District in the wake of the World Trade Center’s 1972 completion. Since then, the nonprofit organization has existed as a force committed to proactively ensure Manhattan’s cultural activity, something which impacts NYC residents, workers, visitors, as well as a global arts community.

The LMCC believes that “visionary cultural initiatives can lead to sustainable community growth and the development in both quantity and quality of opportunities for artists if those initiative align with neighborhood needs,” according to its Mission Statement. The organization has contributed to this growth by providing workspaces for artists, offering grants for large-scale art projects and education purposes, as well as cultural public programming. By gathering funds from arts philanthropists, the LMCC is able to fund artistic endeavors in the Downtown NYC area, which has solidified Manhattan as a true cultural hub on the global scale.

Because of the 2001 terrorist attacks on the NYC World Trade Centers, the Lower Manhattan Cultural Council experienced a devastating tragedy with the loss of artist residency spaces, studios, and even one of their current artists, Michael Richards. Despite the destruction and tragedy of the attacks, the LMCC rallied, and received an enormous outpouring of support from the community. Through fundraising, the LMCC was able to re-establish itself as a true leader in the arts community of New York, emerging stronger and more focused on delivering culture to Manhattan and the rest of the city than ever before. Now, as 2013 marks the organization’s 40th year, the LMCC remains a beacon of cultural awareness and advocacy.

If there were a model for an organization that successfully cultivates culture, the Lower Manhattan Cultural Council would be it.