The Internet is a remarkable platform that has the power to unite people from different parts of the world in a matter of seconds. At any given moment, like-minded people from all walks of life can join in on online forums and discussions, or forge connections with the help of social media. The Internet has revolutionized many artistic mediums throughout its existence, and thanks to a new online social media initiative called Neonmob, art collecting as we know it is about to change.

Neonmob is a growing online community with a focus on art collecting and social media. Mike Duca, the CEO and creative force behind the website, wants you to think of it as “kinda like social pog, coin, trading card, or (insert collectible item here) collecting for this generation.” Neonmob is the result of Duca’s love of technology and collecting, as well as his affinity for social media and entrepreneurship, all of which are combined in the group’s mission. Duca is a Stanford graduate who is dedicated to cultivating innovative, genuinely new ideas. Neonmob is his latest endeavor, and already it has become a community of artists and collectors that is rapidly developing.

Neonmob is a social network, where art lovers and collectors can showcase their collections, share, and create visual art in many forms. It is also a marketplace and platform for artists who want to gain exposure by sharing their works with a vast online audience. The first of its kind, Neonmob is a community of artistic visionaries and collectors who want to utilize social media as a way of impacting the art world and challenge common notions of what the art world can be. Duca, his talented and passionate team, and their growing community are broadening the scope of art collection by including the Internet as a platform to do so. 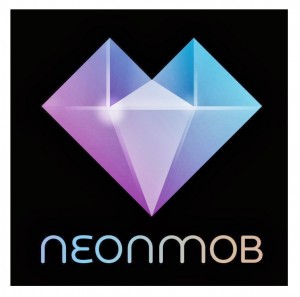 Neonmob is an online community for art collecting.

Its production team describes the website as “a platform and community for discovering and collecting awesome, original, limited-edition, digital art. For those who grew up collecting comic books, cards, stamps, coins or other collectible paraphernalia, the concept of collecting online doesn’t stretch the imagination. The difference is, NeonMob is online, which makes finding fellow collectors and trading partners much easier – and on NeonMob, anybody can create stuff for others to collect!”

Neonmob unites a shared love of collecting tangible objects with a very Internet-driven world, elevating the possibilities of social sharing.

Art traditionalists might be skeptical of this innovative form of collecting, but it’s tech-savvy and forward thinking creators like Duca who continue to bridge the gap between the Internet’s vast capabilities and the core of arts appreciation.