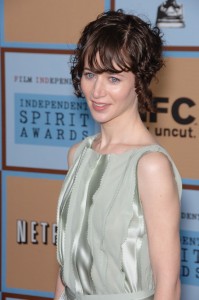 Miranda July is an acclaimed filmmaker and writer who has a knack for capturing unique views on humanity. She won critical acclaim at this year’s Cannes and Sundance Film Festivals, and it doesn’t look like she’s planning on slowing down anytime soon.

Starting this summer, the artist is embarking on her newest creative project, and this one uses email as an artistic medium. According to an article and Q & A with July in the Huffington Post, “Miranda July wants to send you emails from famous people…It’s part of an art exhibition called ‘We Think Alone,’ and it takes place in your inbox.”

Essentially, July is curating emails sent from a handful of public figures and sending them to anyone who wants to participate. According to July, “of course while none of these emails were originally intended to be read by me (much less you) they were all carefully selected by their authors in response to my list of email genres — so self-portraiture is quietly at work here.  Privacy, the art of it, is evolving. Radical self-exposure and classically manicured discretion can both be powerful, both be elegant.” The artist believes that the sharing of emails with strangers evokes an intimate and deeply personal reaction, which inspired the project.

Miranda July is no stranger to web-based participatory art projects. In 2002, she co-created “Learning To Love You More,” with artist Harrell Fletcher, “a web site and series of non-web presentations comprised of work made by the general public in response to assignments,” given by July and Fletcher. These assignments range from “make an encouraging banner,” to “repair something,” and the project attracted more than 8000 participants who submitted photos to the artists. “Learning To Love You More” now resides in a permanent collection at the San Francisco Museum of Modern Art.

The weekly emails of “We Think Alone” will be in response to prompted topics, such as “money,” and will come from various celebrities and artists such as Kirsten Dunst, Lena Dunham, Kareem Abdul-Jabbar and more. For more information about “We Think Alone,” and where to sign up for the weekly emails, visit the project website.