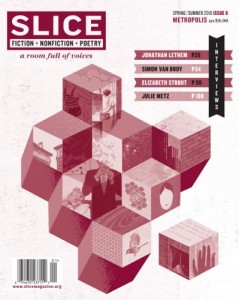 Slice Magazine has been bridging the gap between emerging writers and well-established authors since 2007. The publication is a Brooklyn-based non-profit literary print magazine; its presence has awakened the local writers community in New York City, while also garnering national praise and recognition.

Slice features the poetry, nonfiction, and fictional pieces from its contributors, and submissions have been published side-by-side from both well-known local authors and those still trying to break into publishing. The magazine gives a voice to emerging writers who seek a platform for their work, and its strong presence in Brooklyn has allowed for support for writing conferences and informative community lectures about how to publish your own work.

Something that makes Slice so unique as a literary magazine is its central cultural theme that ties together every issue. This theme allows for cohesion among many diverse and creative submissions, as well as impacts the interviews and articles shared by staff writers. Past themes have been “Villians,” “Lies and Make-Believe,” “Going Home,” “Fear,” and many others that inspire the submissions from authors, bringing a central tone to the magazine, despite the diverse writing styles of its authors. 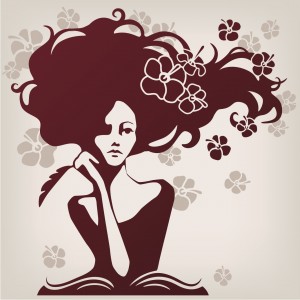 Slice is a well-respected publication for emerging and established writers alike.
Image: Shutterstock

Slice is published twice a year, in March and September, and has had great success, with a continuously growing circulation. The publication has received critical acclaim by some of the most influential contemporary authors, and has also published interviews with an equally impressive list of famous writers such as Salman Rushdie, Tana French, and others. Pulitzer prize-winning author Junot Diaz applauds Slice, saying, “Beautiful, compelling, irresistible: Slice will knock you right out. In the best way possible.”

The magazine’s pages are teeming with brilliant prose from the most highly local authors in the business, as well as those who Slice believes will “become tomorrow’s literary legends.” For more information about Slice Magazine and upcoming events held by the publication, visit its official website.