Tyree Guyton and The Heidelberg Project

Detroit, Michigan, as well as its suburban outskirts, is one of the most notoriously dangerous, impoverished, and failed American cities. Despite this, its people remain resilient, and its art community has found creative ways to sustain its creativity in hopes of rebuilding the city.

Tyree Guyton is one local artist who has faced his fair share of hardships and tragedy. After losing three brothers to street-level violence, all while watching Detroit’s economy and industry crumble around him, he decided that something had to be done. In 1986, Guyton painted his first polka dot on an abandoned house on Heidelberg Street, the same street where he grew up. After that, the Heidelberg Project was born – a massive initiative to foster a local art community, and more importantly, to revitalize the neighborhood in which Heidelberg Street lies. 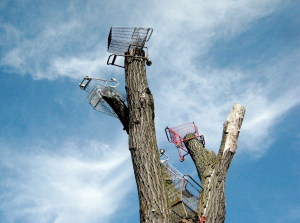 The Heidelberg Project is best described as an artistic community that is working towards reclaiming a part of Detroit that has fallen victim to urban decay, violence, and abandonment. Guyton is the founder and artistic director of the Heidelberg Project, and he “uses everyday, discarded objects to create a two block area full of color, symbolism, and intrigue,” the project’s website explains. The Heidelberg Project was originally designed by Guyton as a creative response to the decline of his childhood neighborhood. Now in its 27th year, the project has intrigued and welcomed people from all around the world, as a living demonstration of the power of art to enhance and transform lives.

An open-air art community that rests in Detroit’s East Side neighborhood, the Heidelberg Project “is a funky outdoor art environment located in the heart of an urban community,” explains project member Jenenne Whitfield. She also explains, “We are giving the community a shot of adrenaline,” of the way that the project has encouraged tourism, arts education, creativity, and a renewed sense of identity. The Heidelberg Project “offers a forum for ideas, a seed of hope, and a bright vision for the future. It’s about taking a stand to save forgotten neighborhoods. It’s about helping people think outside of the box and it’s about offering solutions. It’s about healing communities through art – and it’s working!” 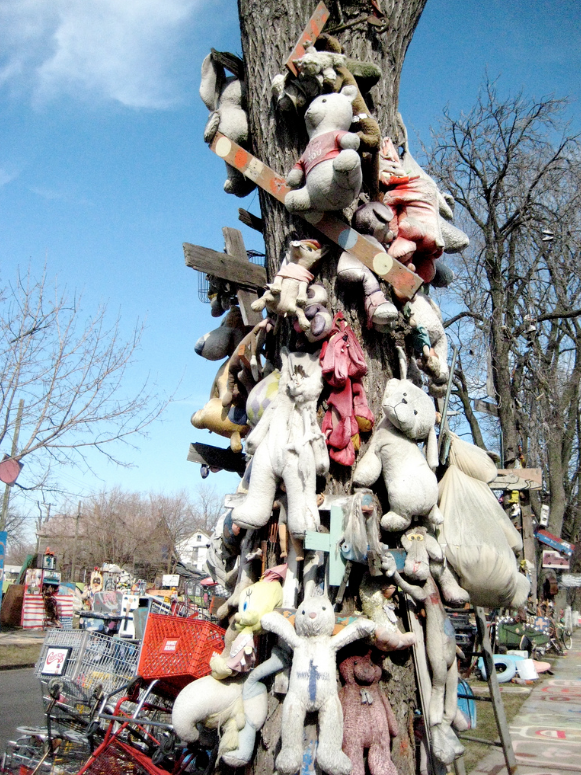 One of the best things about art is its undeniable power to transform lives. Art can help to build or strengthen communities, and it can have a lasting effect on forgotten or abandoned neighborhoods, long after the artist has moved on. The Heidelberg Project has done all of this and more for the city of Detroit, by reclaiming abandoned homes and taking charge of their future, and by using art to transform lives.

For Tyree Guyton, the Heidelberg Project has always been about changing lives and altering the violent urban landscape around him. He knows firsthand just how cruel the streets of Detroit can be, but he has been working for more than two decades to reclaim his neighborhood, and is hopeful about the future. “I want to be part of that great comeback for the city of Detroit, and I do believe it’s gonna come back,” Guyton says. “If I can do one small thing to help the city come back, I’ve done my job. That’s how I want to be remembered.”

Learn more about the Heidelberg Project, how it’s rallying from the recent arson attacks, and how it continues to change lives through the arts by visiting its official website.